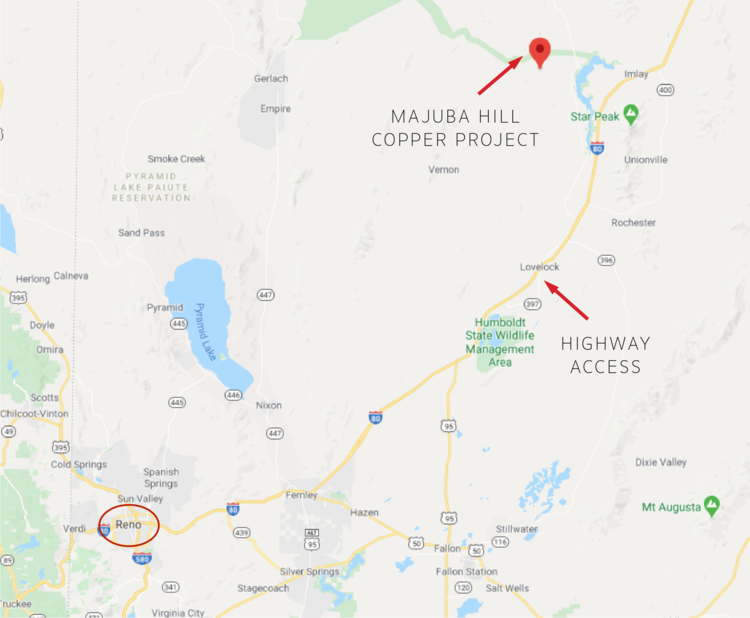 At Majuba Hill the property access, climate, and physical setting are all favorable. The site is remote from large population centers but not so much that it has wilderness value. Normal weather and climate of the area would not hinder year-round access or interfere with exploration and mining activities.

The project shows indications of a potentially large Cu – Ag +/- Au mineralized body with many features in common with both large porphyry copper and silver – tin type mineralization. Small scale historic mining concentrated on the Majuba fault zone and veins in subordinate structures. Drilling has identified a body of oxide copper-silver mineralization, but this body has not been fully defined or properly modeled to produce a mineral resource estimate. A few deeper drill holes, IP geophysical surveys, and surface geochemistry have tentatively identified target areas with potential to significantly expand the mineralization.

Ms. Sever is a CPA designated in both Canada and Australia with a BCom from Edith Cowan University. She joins the company with more than 10 years of experience in senior finance roles over a wide range of industries, including mining, retail and technology. Ms. Sever has held officer positions at a number of publicly listed companies in both Canada and Australia and has a proven record of working in alignment with and to the benefit of the board and associated stakeholders. Her extensive experience with company financings as well as Toronto Stock Exchange and Australian Securities Exchange regulatory compliance will serve to ensure the company manages its affairs in a transparent and proper fashion.

Ms. Pladson has acted as Corporate Secretary and provided corporate governance and regulatory compliance services to many TSX Venture and CSE listed companies since 2009. She works closely with the company’s CEO and legal counsel in maintaining corporate records, managing the day to day operations of the company and ensuring the company’s filings with the securities commissions and exchanges are accurately filed and in accordance with their deadlines. Prior to 2009, Ms. Pladson was an investment advisor’s assistant for two years.

Mr. Nieken has an extensive range of public company and capital market experience. As a founder of Foremost Capital Inc., an exempt market dealer, he continues to provide in depth consulting for numerous publicly listed issuers in the health care, mineral extraction, technology, and wellness industry. Throughout the years, he has served on the boards and as an officer of several public and private issuers. His involvement in those companies has led to the numerous financings that raised substantial capital in his career. He was formerly an investment adviser at Union Securities Corp., where he gained a variety of knowledge in the public market. Mr. Nieken holds a Master of Business Administration (MBA) from the Sydney Graduate School of Management and a Bachelor of Arts from the University of British Columbia.

A practiced international executive Bryson Goodwin brings over 25 years’ experience in finance, management, investor relations and operations in both private and public companies with an operational, market and banking track record in the Resource, Oil/Gas, Technology and Biotechnology sectors. He’s been engaged by a number of resource, energy, cleantech and technology firms, including holding “C” level executive positions in the resource and energy sectors. Mr. Goodwin also sits on the board of a number of public and private companies. He is well known for his early involvement / corporate turnaround of Klondex Mines and his instrumental role in its transition, finance and marketing from explorer to producer.

Mr. Warawa has over twenty years of experience in public and private businesses as a financial and marketing consultant including business development, negotiations, mergers and acquisitions, and increasing brand awareness in a broad spectrum of markets including commodities, automotive dealerships, and the mining sector. He previously worked with the largest auto group in Canada at the dealership level including Audi, BMW, Infiniti, and Mercedes-Benz assisting in productivity and efficiency. He has also experience running businesses and has been the owner operator of multiple small businesses throughout Canada and has seen tremendous success with them throughout the years.

Mr. Ryan has been an active entrepreneur in the resources sector for over twenty years. He has extensive experience in the natural resource sector having served as an officer and/or director of companies such as Bunker Hill Mining, Premium Exploration, Cadence Resources. High Plains Uranium, U.S. Silver Corporation, and Western Goldfields, Inc.  Mr. Ryan has extensive executive experience with start-up companies and provides valuable insights regarding mining and other operations as well as public company expertise. Mr. Ryan has also acted as a professional Director in a number of cases of turnaround and/or distressed company scenarios. Mr. Ryan obtained a B.S. in Mining Engineering from the University of Idaho in 1985 and a Juris Doctor from Boston College in 1992.

Buster has been engaged in exploration and evaluation of quality mineral deposits for 40 years in the western United States, Mongolia, and Argentina. In 1995, Hunsaker Inc. was formed as a full-service, geological consulting business providing field services and all aspects of prospecting, early-stage exploration, and project management to mineral exploration companies. Hunsaker Inc. has been retained by numerous junior Canadian mining and exploration companies as well as major Nevada gold companies including Barrick Gold Corporation, Newmont Exploration, AngloGold Mining, Vista Gold, and Kennecott.  Prior to forming Hunsaker Inc. he was employed by mid-size and major mining companies, including Newmont, Atlas Precious Metals, and Echo Bay, as Project Geologist, Senior Geologist, and Chief Mine Geologist.